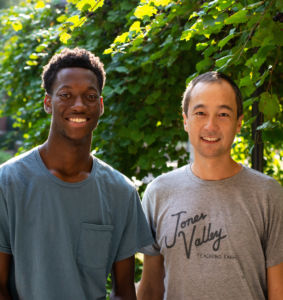 Meet Alan Gurganus and Telvin Caples, JVTF’s current team on the Teaching Farm at Avondale Elementary School. Alan is a champion of sustainability and has led in science and environmental education efforts since 2001. Alan joined as the Instructor at Avondale Elementary in the Spring of 2018. Telvin was an intern at Woodlawn High School during the 2017-2018 school year and joined JVTF as an Apprentice in February of 2019. He is currently stationed at Avondale Elementary. Keep reading to learn more about them!

What are two goals that you have for this school year?

Alan: Exceed 1,000 pounds in crop yield and sell out every Student-Run Market.

Telvin: I’d like to be even more of a leader for others such as the kids because I feel that I can excel in a leadership role. I am practicing this by leading Farm Club. I also want to improve my classroom management skills.

What makes your Teaching Farm unique?

A: We are easily accessed by students during P.E. and recess, which gives the students a daily opportunity to interact with the Teaching Farm and its farmers. We also have two shaded teaching spaces with white boards, making it a welcoming environment for teachers wishing to lead their own lessons outdoors.

T: Being up on the hill, we get to see the entire city of Birmingham from the Teaching Farm. We also have a Purple Martin house and a songbird magnet that makes bird calls to attract the martins.

What content area do you enjoy teaching the most?

A: Environmental Science. I am in awe of the interconnectedness of life. There isn’t a moment that goes by that we don’t rely upon our environment. For this reason, I believe awareness, respect, and understanding of our environment is important.

T: Science or P.E, because you don’t really have to stray too far from the farming aspect or the lesson.

What is your go-to song for weeding?

A: I don’t typically listen to music when outdoors, but lately I’ve been listening to mostly soul revival, like Charles Bradley.

T: Anything by Queen, The Beatles and Kanye West

What is your favorite recipe you have ever cooked with students?

A: Veggie sushi. There were so many unique flavors combining for a flavor explosion: pickled radish, seasoned spinach, rice, carrots, and so forth.

T: My Specialty Stir Fry with sauce that I created off the top of my head one day. We can use it with any vegetables that we grow year-round. It is both sweet and spicy, but I plan to work on different flavor variations.

What is your favorite Farm Club badge?

A: Compost Ally. There are so many lessons in a pile of compost, including life and death, decomposition, invertebrates, fungi and bacteria, carbon and nitrogen, nutrient cycle, etc. Soil is often taken for granted, but when we can make it ourselves from food and plant waste with a lot of help from nature, then it becomes more than just a pile of dirt.

T: Pollinator Protector. It is essential to the Teaching Farm and the planet. Bees are the most important insect and we need more pollinator protectors in the world. There are other important pollinators, too, but bees are the most efficient and are at risk of becoming extinct.

What is something you learned while developing lessons that you didn’t know before?

A: I didn’t know that the sensitive plant closes its leaves by rapidly releasing water from specialized cells, a phenomenon called thigmonasty. It is believed that they respond this way as a deterrent to herbivores trying to eat them. When the leaves close up and drop, the sensitive plant’s thorns are exposed, making other nearby plants a more desirable food to the herbivore.

T: I learned that lessons are very hard to make, but I’m getting way better at it and I’ll keep improving. Also, in the Silk Road lesson, I already knew the facts that we taught, but seeing it visualized and acted out through the students really solidified my understanding of it. Each group of students represented a country (India, China, Egypt, Saudi Arabia) and they visited each other to trade spices, religions, and other materials. It really felt like we were on the Silk Road!