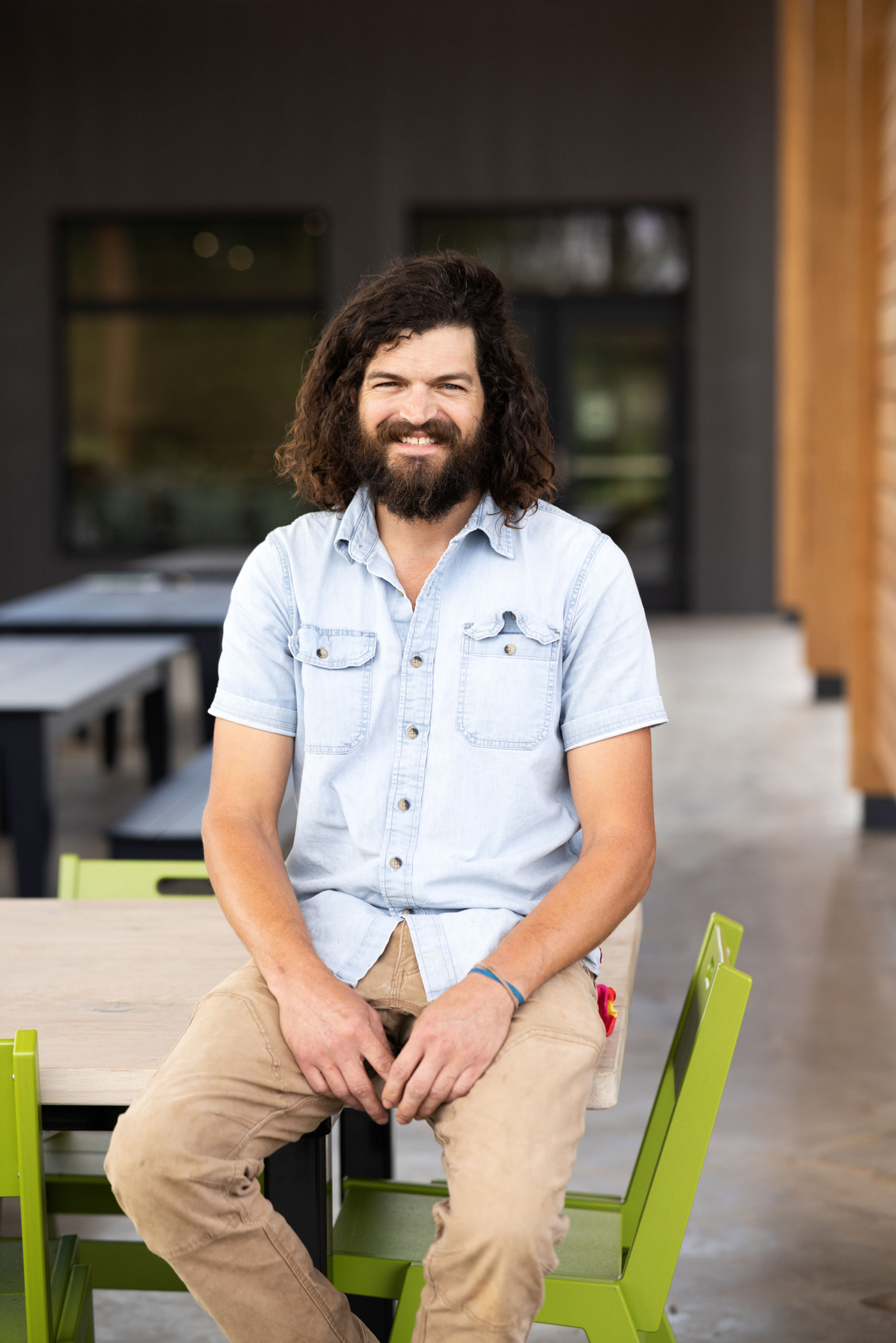 In 2014, Jones Valley Teaching Farm was introduced to Scotty Feltman while he was teaching at Avondale Elementary. With his help, we saw first-hand how important and powerful hands-on learning would be for his 5th grade class. A few years later, Scotty transferred to teach Environmental Science and run our Good School Food program on our newly built Teaching Farm at Woodlawn High School. During his time with JVTF, he helped established a fully-working production farm, a paid internship program, and a student-led farm stand. He invests countless hours into those around him, excels as a leader and mentor, and Jones Valley Teaching Farm would not be where we are today without him. Scotty is currently serving—not too far away—as Camp McDowell’s Farm School Director where he continues to farm, educate, and impact Alabama youth.

What was the first interaction you had with JVTF?
So I originally, I found out about Jones Valley through their partnership with Avondale Elementary and kinda getting that process going of them coming into our school and creating a garden space, asking  questions, and looking at what they’d done in the past. That’s when I met Grant Brigham and Katie Davis and started having conversations about what their plans were to have a partnership with Avondale Elementary School.

Ever since I’d been teaching I’d been trying to get kids outside and growing in some capacity so we just started with a little flat area at the bottom of Avondale by some tennis courts. Just ‘cause I knew I needed to get ‘em outside, and I thought that being able to get your hands dirty and interact with the soil and really be outside and paying attention was a great way for those kids to get out of the classroom and experience nature and learning in a different way. Most  people don’t like sitting down learning. I didn’t; I still don’t. And I thought why not get ‘em out and do that. Something that I’m familiar with growing up so I started taking them outside and we started doing different things and we built a garden space out there and then I maintained it and other classes came out and used it but I still spent a lot of my time working on it. And over that time period I realized that it’s not a sustainable model for a teacher to just try to maintain a garden space and use it as education and say “hey, during my off block I’m going to let your class come out and I’ll lead you” ;You can’t do it. It takes so much of your time but it’s such a useful tool for education, getting ‘em in that space and so when Jones Valley came in and said ‘hey we wanna kinda re-look at what you’re doing. We’re gonna work with you, we’re gonna provide an instructor and we’re gonna teach everybody. We’re gonna take that  load off of you.’ I thought that was like a home run, you know,  because I could still do what I like to do. I could still bring my kids outside; I could collaborate. I could get my hands dirty, get their hands dirty and then have people that I felt like were collaborators in that process instead of just like somebody who just came out and had a little garden space. But, for me, I used it, as a resource for me to educate kids like from that first interaction with them to my last days at Woodlawn. I always looked at this organization as a wonderful tool as an educator. You can use everything we’re doing to teach kids. This organization’s gonna come in and we’re gonna create these spaces and these opportunities for you, and I’m all about it.

So having a partner like that come in and do all the groundwork all the infrastructure was amazing. So that’s when they offered me the Woodlawn position. I knew of what kind of an impact it was gonna make. So leaving a job that I liked and a place that I really loved to do something totally different came from a stand point of what kind of impact can we make, what kind of learning opportunity can we create for kids on a larger scale differently. And so that was it for me, it’s like this is such a tool and such a useful thing to teach kids that if I can take advantage of it, I’m gonna do it.

What do you want people to know about Jones Valley Teaching Farm?
There’s so much…I think for me it’s creating a unique opportunity to educate kids in a way that’s not taxing on a community or a school. We’re gonna come in and create a space for your kids…I think that what they do within the Birmingham community is something that if every school in the country could have a Jones Valley Teaching Farm and have an instructor come in and do it, I think they would do it. Jones Valley is creating an incredible outdoor learning space and providing extremely competent and engaged individuals to lead and guide those lessons. They’re extremely impactful in those school systems and they’re providing such a neat service to those teachers, those communities…I just think it’s such a unique opportunity to educate kids.

What is your vision for the Center for Food Education?
I’m looking at this to be a place where anybody in the city feels welcome and everybody looks at it as something they can be proud of. I think it would feel more of like a community center and less of like there’s an organization that’s doing things here and there. Maybe it can be embraced a little bit more by the city as a whole I think. That’s what I envision it as and I think I think it’s definitely possible and I think the steps are there to make it happen.

One thing about this place is that it’s adapted over the years to fit what not only the organization needs but the best way to serve the community within that process. And so I think that continuing to adapt that with this process down here…creating a space where everyone in the community and the city can be proud of because of what they’re doing not only statewide but for people directly in the community, helping them, making Birmingham a better place in whatever way they can.

When you reflect on your time with JVTF, what comes to mind most?
As much as I enjoyed working at and with Jones Valley, I think what I’m most thankful for in all of  that is the relationships I got to build with people–the ability to watch young people grow in so many different ways. Being able to just get a glimpse into different people’s lives and get perspective on stuff has made such an impact on who I am as a person, as a father, as a friend….all those things. And I’m so appreciative of that and I think I’ll take that with me always. People that I worked with, people that I got dirty with and sweaty with and argued with and at the end of the day celebrated with. Those are the things I’ll remember for the rest of my life and an experience that I want my children to have. So for me, my biggest takeaway from that is the people, that’s what I’m most proud of that’s what I’m happy to see and that’s what I’ll always remember is those people I worked with and the work we did together and a bunch of food that we grew which is cool.